Shopping Cart
Your Cart is Empty
Quantity:
Subtotal
Taxes
Shipping
Total
There was an error with PayPalClick here to try again

Thank you for your business!You should be receiving an order confirmation from Paypal shortly.Exit Shopping Cart

Well, we kicked off this year's spring show season with a bang.

Despite the massive amounts of snow still on the ground, we hauled a few animals up to the city for the A.L.P.A.C.A. Spring show, where we had entered both Asher and Buri, as well as planned on picking up a new addition to the farm, BR Rum's Bocelli.

The weekend was fantastic, the weather semi-cooperative (and much warmer, as the City was actually experiencing a little spring, unlike home), with the boys bringing in ribbons from the start. Buri, finally deciding that his disappearing tricks were a little old, allowed the judge to inspect him and managed to reel in a 3rd for us, making us quite proud. Our new addition, Bocelli, was sadly alone in his first class. The judge commented on how sad it was he didn't have any competition-- however, despite this he still managed to place first, and went on to the supreme championship round.

Now this is when everyone was stunned, as our little guy managed to snag Supreme Male Champion, above some extremely tough competition including seasoned, champion males of varying ages. Everyone was surprised, and beyond stunned and pleased. 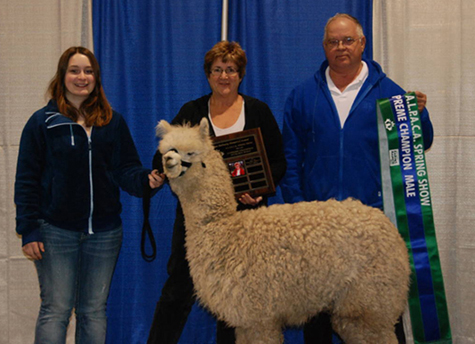 Of course, his earning such a high honor (and proving the fantastic breeding behind him by his breeders, Ernie and Denise Gamroth!), meant that he couldn't come home with us that weekend, as originally planned, as he was going to go on to the futurity the next weekend.

He also cleaned up at the CNASF, pulling a 2nd in his class (a very large one as well!) and earning best handle for his class, we were beyond elated to be able to see him continue to do well. The little guy did come home with us that weekend, christening the new truck as he rode in the backseat watching G-Force with the kids in the back as well.

Before I continue on, I just wanted to thank Ernie and Denise for allowing Paityn and our farm the honor of owning such a fantastic guy. We can never thank you enough, and are and will be forever grateful.

Oops, you forgot something.

The words you entered did not match the given text. Please try again.